“ For the time when humanity's existence becomes ... "solitary, poor, nasty, brutish, and short." ”

Weapons are items that can harm and kill people. Unsurprisingly, there are a lot of things you can kill with or be killed by. Weapons range from assault rifles to slings, from chainsaws to chunks of driftwood. They are essential for combat and can be found everywhere throughout the city by searching in specific locations or/and by killing certain NPCs. A few weapons instead require to be crafted and few others can only be found around at certain times of the day, week or/and year.

Weapons used in close combat. They can either be Bladed or Blunt. None of them makes any noise.

Sharp and deadly. They can be anything from a fire axe to a broken bottle.

Blunt and deadly. They can be anything from a baseball bat to a rock.

Weapons used in far combat. Both Firearms and Throwing Weapons belong to this ccategory.

Firearms are powerful against the dead. There are two types of Firearms: Small Arms and Rifles. The only difference between them are the skills that affect their hit ratio. They need ammunition to be used (see below). While powerful, all of them tend to be pretty noisy (with the exception of the Suppressed Pistol, that doesn't make any noise), which isn't very good, as it can easily attract the attentions of nearby players and potentially lead to be tracked down and killed (for more info, see Stealth and Detection).

While few of them cannot be exactly defined as actual "firearms", they are still technically classified as such. Unlike traditional firearms though, they don't make any noise.

Weapons or objects to throw at enemies. Pay attention to the supplies, because they tend to run out very quickly, as those weapons are consumed when used whether the attack is successful or not. Explosive throwing weapons like Grenades tend to be pretty noisy, and as explained in the Firearms section, that's a bit of a risky handicap (for more info, see Stealth and Detection).

Used for home renovations and massacres. The hit ratio of power tools can be increased with the Power Tool Expertise skill. They require ammunition (see below). While most of them are melee, a couple of them are ranged. And while powerful, most of them tend to be pretty noisy, which as already explained in the previous paragraphs, isn't a positive trait (for more info, see Stealth and Detection).

These weapons don't exactly belong to any category due to their unique nature, even though their "Damage" and "To Hit" scales are still determined by the weapon type that they are technically classified as.

Clips, shells, gas cans, and other types of ammunitions used in firearms, power tools, and a few other ranged weapons.

Traps can only be set up inside a building, one for each (or for each building tile if it's a multi-tile building). Setting up a trap costs 2 APs. The trap will usually trigger when another player or even the same player will enter the building or carry out some building-related action (closing/opening the door, turning on/off the brakes, searching, etc.).

There's a slim chance that the trap, when triggered, will go dud. If that occurs, it won't inflict any damage or make any sound.

There's also a slim chance of automatically disarming the trap when triggered, and if that occurs, the trap will be acquired by the player, who then will be able to set it up again. (only observed with the Bear Trap, odds of disarming are unknown).

Finally, it's worthy of note that more than 1 Sticky Bomb can be set up in the same building. (Bug)

These weapons can't deal any damage and are often accompanied by an humorous event line. They are simply used for the sole purpose of bothering, annoying and pranking other players. As such, their Hit Chance tends to be pretty high.

If used on NPCs, they will turn hostile (if previously friendly to the player) and will have a chance of counterattacking at each attack, just like if they were being attacked with an actual weapon. As such, these weapons can also be especially useful if the player is currently trying to get killed by an NPC to be resurrected or turned into a Vampire or a Zombie without risking to kill the NPC itself in the process.

Warning: if used on a player who was previously hidden, just like for actual weapons, this will permanently unhide them even if the attacking player logs out, until the attacked player will log back in and hide again. As such, it's highly suggested not to do this to friendly or allied players, unless it's done with the intent of trolling, as it can be very risky and dangerous. 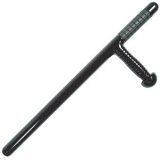 The night stick. A valuable tool in the war against the dead, though creatures of the night have been seen wielding them as well.

Assault rifles are particularly good for assaulting others.
Add a photo to this gallery
Retrieved from "https://hellrising.fandom.com/wiki/Weapons?oldid=18772"
Community content is available under CC-BY-SA unless otherwise noted.