“ For the time when humanity's existence becomes ... "solitary, poor, nasty, brutish, and short." ”

Weapons are items that can harm and kill people. Not surprisingly, there is a lot of things that can really kill you. Weapons include Assault Rifles to Barbed Wire to Weed Trimmers to Gas Station Bathroom Keys. They are essential for combat and are found everywhere throughout the city by searching locations. A few other weapons instead require to be crafted.

Firearms are powerful against the dead. There are two types of firearms: Small Arms and Rifles. The only difference between them are the skills that affect their hit ratio. They need ammunition to be used (see below).

Thrown at enemies. Pay attention to the supplies, because they tend to run out quickly.

Used for home renovations and massacres. The hit ratio of power tools can be increased with the Power Tool Expertise skill. They require ammunition (see below).

Weapons that do not fit into the other categories.

Bullets, shells, fuels, and other munitions used in firearms, power tools, and a few other weapons.

These weapons do no damage; they are simply used for the sole purpose of bothering others.

Can only be setup inside a building, they do damage when a player enters. One per building only. Small chance to disarm the trap when you enter, and pick it up, allowing you to set it somewhere else. (Only observed with bear trap. Odds of disarming are unknown) 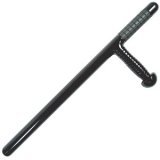 The night stick. A valuable tool in the war against the dead, though creatures of the night have been seen wielding them as well.

Assault rifles are particularly good for assaulting others.
Add a photo to this gallery
Retrieved from "https://hellrising.fandom.com/wiki/Weapons?oldid=17484"
Community content is available under CC-BY-SA unless otherwise noted.